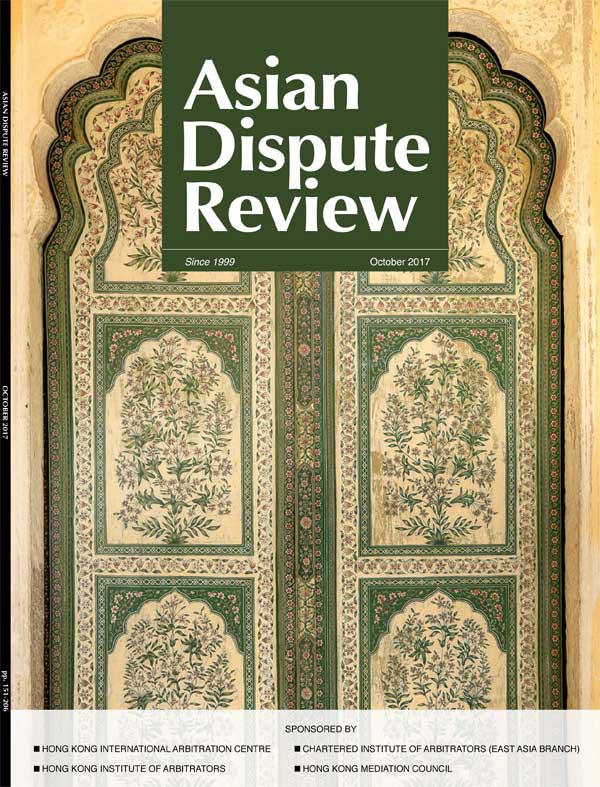 This issue of Asian Dispute Review commences with an interview with the Department of Justice of the Hong Kong Special Administrative Region on the recent passage of arbitration-related ordinances in respect of third party funding (TPF) and the arbitrability of disputes involving intellectual property rights. Anselmo Reyes then discusses the concept of an arbitrator's ‘due process paranoia’ and surveys theories that may assist an arbitrator in dealing with this phenomenon.

Vincent Connor then discusses the immunity of Chinese state-owned enterprises in Hong Kong and compares the immunity rules of several countries in the context of China's Belt and Road Initiative. This is followed by an article by Kim Rooney which looks at Hong Kong's approach to the regulation of TPF of arbitration and mediation and includes a brief comparison with Singapore's TPF reforms of 2017 and with existing regimes in Australia and England & Wales. Michael Charlton then explores the present framework in Hong Kong within which an expert witness has been required to act since the development of the formal protocols as a result of the Civil Justice reform in 2009. Next, Christopher To provides insight into the relevance of statutory construction adjudication, the reasons for its absence in Hong Kong and the pressing need for Hong Kong to enact security of payment legislation.

The 'In-House Counsel focus' article by Olga Boltenko delves into China's Belt and Road Initiative, focusing primarily on the dispute resolution angle. Recent developments in arbitration in Japan, together with the reasons for the comparatively low number of Japan-seated arbitration cases that are filed each year and how to address them, are discussed in the 'Jurisdiction focus' article by Yoshimi Ohara.

We extend a warm welcome to Harry Edwards, who joins our team as an editorial assistant.