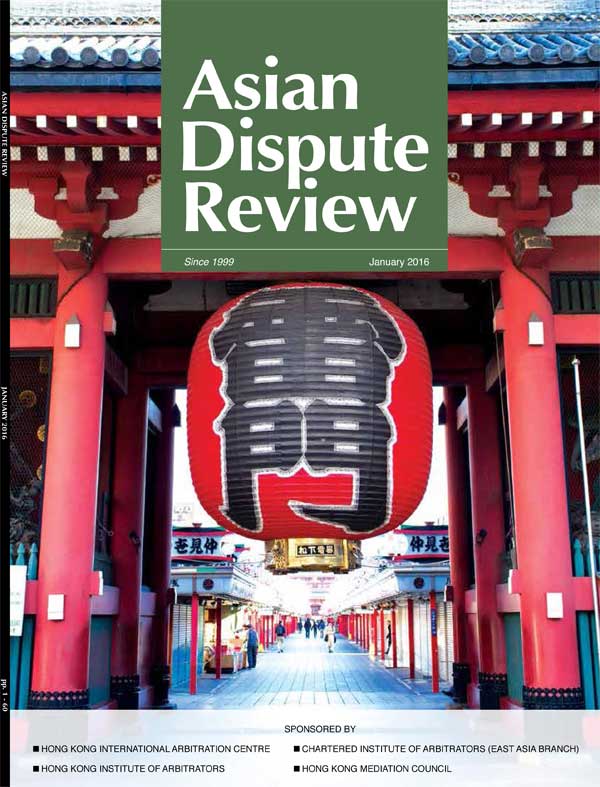 Asian Dispute Review begins 2016, having had a successful previous year. Throughout 2015, the Review published articles on a broad range of topics that related to dispute resolution in Asia, including an issue that gave mediation prominence and one that published some of the key speeches at a conference in Hong Kong celebrating the Chartered Institute of Arbitrators’ Centennial. A core goal of the Review in 2016 will be to provide a similarly broad range of interesting articles.

This issue commences with David W Rivkin’s Keynote Address, delivered at ADR in Asia Conference 2015, which proposes a new approach between arbitrators and parties to enhance the effectiveness and efficiency of arbitration. In our Arbitration in Asia section, Sir Bernard Eder examines the role of courts in referring matters to arbitration and ordering provisional or conservatory measures prior to the commencement of arbitration. Justin D’Agostino and James MacKinnon then discuss the proposal made by a Hong Kong Law Reform Commission Sub-Committee that Hong Kong’s Arbitration Ordinance be amended to permit third party funding for arbitration. An analysis of the enforcement of New York Convention Awards in China is then provided by Marike Paulsson, Kevin Wu and Rachel Wu. An article by Laura Feldman, Veronique Marquis and Lucie Igor follows, which explores dispute resolution for financial disputes. The In-House Counsel Focus article by Dongdoo Choi considers, from a practical perspective, the choice of law issues raised as a result of the English Sulamérica case and the Singapore FirstLink case.

A case note by Matthew Townshend assesses the Hong Kong case of KB v S – in particular, the ten principles of enforcement set out in Mimmie Chan J’s decision of 15 September 2015. Finally, Albert Monichino QC reviews a commentary on the SIAC Arbitration Rules.

We take this opportunity to wish our readers all the very best for 2016.